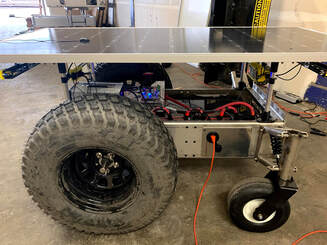 For more than a century, chemicals have been the most effective tool used to control pests of all kinds, but that tool  devolved into the proverbial hammer; now every problem is a nail. In other words, innovation outside of chemistry hasn’t kept up.  When there is a pest that needs to be controlled, growers try everything in the available playbook to manage the problem, but eventually, they’re forced to resort to chemicals.

Chemicals play a massive and important role in agriculture and food production, as there are a lot of problems that are mitigated by chemicals. But when it comes to soil pest and pathogen management, chemicals have always struggled to achieve, and especially maintain, efficacy while being mindful of their long-term impact on the environment. Balancing efficacy and persistence is where chemicals struggle most. If it is effective, chances are it persists too long in the soil and is harmful to the crop or the environment. There hasn’t been a new, effective chemical treatment for nematodes in nearly a decade, and there isn’t anything in the pipeline that holds any promise. Until now...

There are dozens, if not hundreds, of Ag markets that have had to rethink their pest management strategy because the chemicals they rely on to manage nematodes are no longer approved, efficacious, or available. Golf and sports turf are no exception. In fact, of all the Ag segments that struggle with nematodes (and other soil pests) turf is the only one that actually has effective chemistry to manage infestations…sort of. What is effective is often limited to one or two soil pests and must be automatically applied at the max rate with regular reapplication. These nematicides are often applied in conjunction with other chemicals and this process requires re-entry delays of hours to days, pests develop resistance over time, and the list of downsides continues. But chemistry is all they have. Until now…

Directed Energy Technology was developed as a non-chemical solution to eliminate soil pests in agriculture.  It fills the void left by chemicals that have been phased out or lack broad-spectrum efficacy. The benefits of the technology are numerous. Because it’s non-chemical, the technology can be used in fallow or planted soil making it a perfect fit for golf and sports turf, small berry fruit, orchards, or any Ag segment that relies on long-standing plants to produce their commodity year after year.

Direct|Turf is the first Directed Energy (DE) soil amendment to be introduced to the market. Focusing on turf is an obvious first market because of the struggle managing infestations on a crop that remains in place for years, but turf also provides an R&D benefit of nearly immediate results. Where chemicals are applied and maintained to achieve the desired visual effect over the long term, a Direct|Turf treatment will see improvement in a few days and follow up treatments (two to three times a year depending on the region) will ensure the infestations are extremely slow to return.

Direct|Yield is a DE soil amendment for long-standing agricultural crops such as small berry, orchards, vineyards, etc., that struggle to manage infestations of nematodes and soil-borne insects that steadily reduce yield year after year.  Currently, when infestations reach economic threshold, growers may rip out entire acres and replant.  Direct|Yield can eliminate this expensive practice.

Directed Energy soil amendments use specialized equipment that makes contact with the soil to apply the treatment. The technology utilizes sophisticated energy storage modules (often called batteries) to provide front-end power. The batteries can be recharged and maintained by solar panels on the system’s battery-powered tractor or plugged into a standard electrical outlet. This eliminates the need for a fossil fuel tractor or generator thus making the treatments carbon neutral.

The Lisi Global family of Directed Energy soil amendments will include Direct|Organic for the highly specialized needs of the organic grower. Direct|Batch for in-house treatment of batch-processed seedlings and starts, and soil or other growing media for greenhouses to ensure only clean rootstock leaves the facility.

Today, Lisi Global is focused on Ag segments and commodities with a smaller footprint. But R&D is looking ahead to expand applications to large area row crops like vineyards and vegetables, and to develop other beneficial and synergistic aspects of the technology that have been identified. The potential is seemingly endless for this breakthrough technology and as the company deploys Direct|Turf on the west coast later this year, the development opportunities will help fast-track deployment of the other Directed brands.